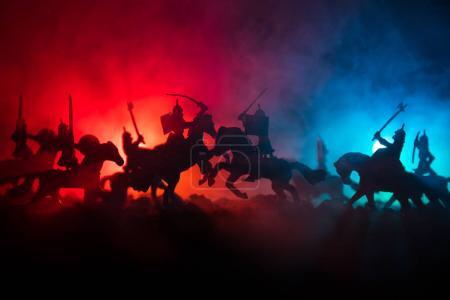 Folks let’s talk about Spiritual battle real quick. It is something raging all of the time. The Spirits are at war EVERY SINGLE DAY. It’s not that all of a sudden they switch their attention to the unsuspecting Christian. There is sin,temptation , doubt, and fear around EVERY CORNER! Jesus didn’t say “Let’s go on a jolly good walk in the park to find the gold at end of the rainbow.” He said take up your cross(cause/mission) and follow me”. He says follow and we follow. That can be follow me into a sweet time of fellowship with likeminded believer or it could also mean follow me into battle against the false teachers disguised as brothers and sisters in Christ. Then He can lead us into obvious blessings that overflow and then right into blessings that don’t always immediately feel like blessings. He’s GOD and has the right to lead us,call us,and command us into whatever season He needs us in to put us in the best position for battle against the adversary! He allows the shots of fiery lies to be shot our way by Satan to strengthen us and to prove His strength. It hurts! Ouch oh it hurts! It hurts so bad that it is downright tempting to walk off the battlefield hands thrown up in surrender to the wrong king. I think there is the misguided assumption that when you become a Christian that it means a warm fuzzy life carefree from pain and suffering. Like some how Jesus acts like a bandaid from all our sorrows. WRONG! He IS our healer but healing spiritually isn’t really anything like being healed naturally. It’s far grater but so are the wounds that the healing must be delt with.

As this spiritual battle continues on and the lies of Satan are being shot with cannons at lightning speed there are some things that you can do to to bring victory in the name of Jesus Christ.

1)Make sure that you’re in the Word. Cliche as this sounds it’s really your only basis to go into battle. Without it you’re useless and might as well give up the fight. You’ll be a sitting duck and very little help to the kingdom. In fact you can bring great damage to the fight at hand.

2)Let others know that you’re facing this war. Partner in prayer with as many as you can. A war is never won alone. It takes a mighty army of people all laboring together with the indwelling of the Holy Spirit.

3)Confront every single lie head on. Is Satan telling you something about a thought someone has about you? Go ask them directly if what he is telling you is true. They’ll appreciate you coming to them. Is Satan discrediting your value? Read the Word and see what the Lord has to say about you. Are the attacks coming in the form of past sins being brought up? Recall the moment you laid them at the foot of the cross. Read what Jesus has done for you and when the Holy Spirit entered you!

4)Get sleep. This one really isn’t spiritual at all but Satan does attack when we are weak. If you’re weary and worn out physically it can be prime time for lies,nightmares,and imaginations to swell up.

Be of good cheer dear ones as we as brothers and sisters unite against the one who fell! If a Christian family member comes to you battle weary, walk along side them to lift them up to continue the good fight. Soon they will be the one to lift you when you have been wounded and the positions of battle have been changed. Go forward with the mighty armor of God knowing what Ephesians 6:12 says “For we wrestle not against flesh and blood, but against principalities, against powers, against the rulers of the darkness of this world, against spiritual wickedness in high places.” You have the power of Jesus Christ walk in all confidence as given the example in 2 Timothy 2:3-4 “thou therefore endure hardness, as a good soldier of Jesus Christ.

No man that warreth entangleth himself with the affairs of this life; that he may please him who hath chosen him to be a soldier.” We can be pleasing to the Lord by our faithful battle not with others but with Satan alone. He WILL GO DOWN!

This is a text widget, which allows you to add text or HTML to your sidebar. You can use them to display text, links, images, HTML, or a combination of these. Edit them in the Widget section of the Customizer.
%d bloggers like this: